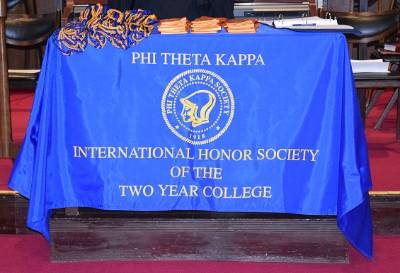 The purpose of the Phi Theta Kappa International Honor Society is to recognize and encourage scholarship among associate degree students.

To achieve this purpose, Phi Theta Kappa provides opportunities for the development of leadership and service, for an intellectual climate to exchange ideas and ideals, for lively fellowship for scholars, and for stimulation of interest in continuing academic excellence.

NCCC’s Beta Theta Pi Chapter was charted in 1999 and has successfully inducted 1,027 members to date. Inductees have shown great academic achievement as well as an interest in the hallmarks of Phi Theta Kappa.

Each semester, invitation to membership is extended by the chapter to students who have completed at least 15 hours of course work at NCCC with a minimum 3.5 grade point average, leading to an associate degree.

This year’s new members are:

Phi Theta Kappa has been recognizing academic achievement in two-year colleges since 1918. Phi Theta Kappa has chartered over 1,300 chapters and has inducted more than 3.5 million members. Phi Theta Kappa chapters are located on campuses in all fifty of the United States, Canada, U.S. territories and military installations abroad. It is the only international acclaimed honor society serving institutions which offer associate degree programs.

Two-year college presidents and administrators of associate degree programs in four-year schools have continually recognized membership in Phi Theta Kappa as an honor and a privilege. Membership is given added significance by the fact that the Society is recognized by the American Association of Community Colleges as the official general honor society for two-year colleges. More information about Phi Theta Kappa can be found at www.ptk.org.