Following a successful series of summer sessions focused on wellness, personal finance and Black History in the Adirondacks, North Country Live will shine light this fall on the history, traditions, and challenges faced by Indigenous Peoples, particularly the Saint Regis Mohawk Tribe at Akwesasne.

North Country Live: Fall Series! will be held via Zoom. The presentations are free but you must register in advance to receive the Zoom invitation.

At the dawn of the Seven Years War, a new indigenous community was established on the St. Lawrence river, which was then part of New France.  The Jesuit priests who established a mission there named it St. Regis, but the Mohawks and other natives called it Akwesasne, or "where the partridge drums."  Warriors from the new village fought alongside the French throughout the conflict, but eventually made peace with the British during the conquest of 1760. During the American Revolution, most but not all sided with the British, which also happened in the War of 1812.

In the War of 1812, Akwesasne was not only divided by American and British sentiments, but by an actual border drawn through their village.  Conflict over this line disrupted the peace of the community for many years.  The 1800's was a time of tremendous change for the community, as American and Canadian settlements began to increase all around it. By the end of the century, outside governments imposed an elective form of government on both sides of the border, which resulted in a resurgence of old leadership traditions and a cultural revival that continues today.

About Darren Bonaparte:
Darren Bonaparte is the director of the Saint Regis Mohawk Tribe's historic preservation office.  He grew up in Akwesasne and has studied its history for more than thirty years.  He is the author of several books and articles and a frequent presenter at schools, colleges, and universities.  His website, The Wampum Chronicles, has been online for 21 years.

Moderator Bruce Kelly will lead a guided discussion with panelists on the impact of the COVID 19 pandemic on the Saint Regis Mohawk Tribe and Saint Regis Mohawk Health Services. Panelists will share their experiences and perspectives related to responding to this pandemic at Akwesasne. There will be a brief question and answer period during the last part of the program.

“Ohero:kon - Under the Husk” is a 26-min documentary following the journey of two Mohawk girls as they take part in their traditional passage rites to become Mohawk Women. Kaienkwinehtha and Kasennakohe are childhood friends from traditional families living in the Mohawk Community of Akwesasne.They both take part in a four- year adolescent passage rites ceremony called Oheró:kon “Under the Husk” that has been revived in their community. This ceremony challenges them spiritually, mentally, emotionally and physically. It shapes the women they become. 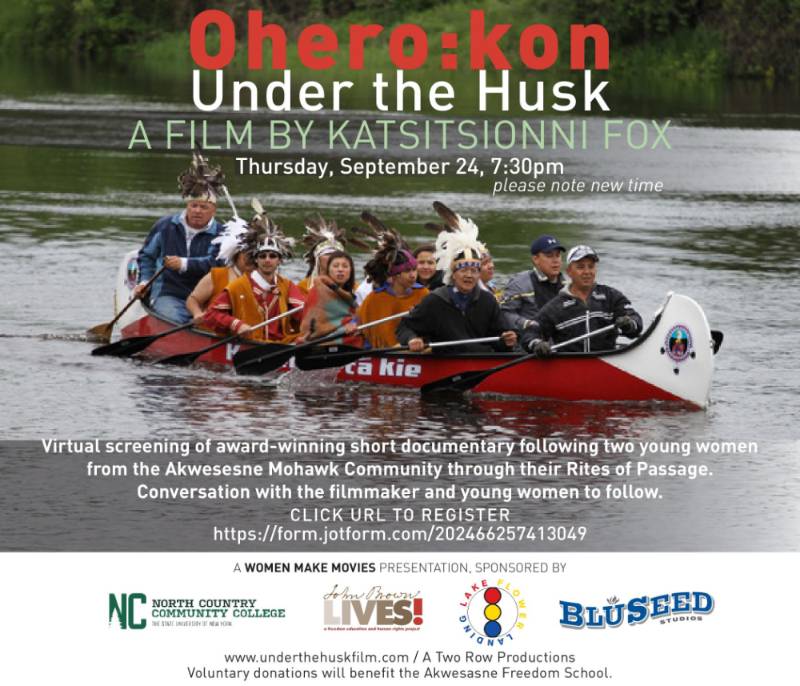 The film will be available to watch online from September 20-25. There will be a conversation with the Katsitsionni and one of the young women in the film immediately following the Sept. 24 screening at approximately 8 p.m.

Film website and Trailer: underthehuskfilm.com
To Register: https://form.jotform.com/202466257413049
Screening free of change but voluntary donations can be made to the Akwesasne
Freedom School: paypal.me/foafs

If you have a question about North Country Live: Summer Series, contact Selina LeMay-Klippel, the college’s coordinator of career and technical education programs and curriculum development.

Place Names in the Adirondacks: A Diverse Past

Black History in the Adirondacks:

Hanging from the Beam: Harpers Ferry and the Execution of John Brown

The Story of Timbuctoo: Black Voting Rights in the Adirondacks

Telecommuting in our New Virtual World

Negotiating Your Salary and Benefits

Resilience in a Time of Crisis